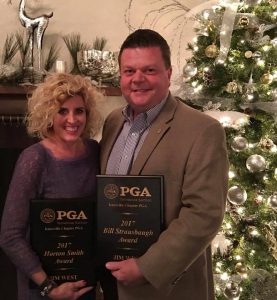 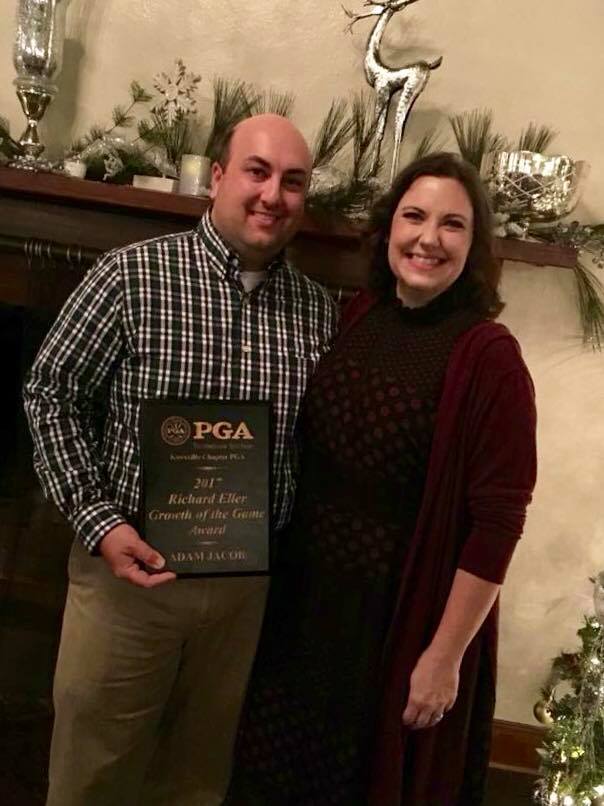 West received two awards, the Horton Smith Award for the promotion and creation of educational opportunities for golf industry professionals and the Bill Strausbaugh Award for mentoring PGA professionals. This marks the third year in a row that West has received the two awards.

“It’s truly an honor to receive these awards once again,” West said. “But really, they don’t mean that much to me because I’m in this profession because it’s my passion, and golf is my love. I didn’t get into this career so that I could win these awards. More importantly, I’d have to give a lot of the credit to all of our staff members for making this job much easier for me to do because without them, it’d be much tougher.”

West has served as the chairman for the Tennessee PGA’s educational committee for several years, which has helped him create business opportunities for other professionals and land him his third Horton Smith Award.

“Probably one of the biggest things is that I created business summits at the chapter level,” West said. “For a number of years, I’ve really noticed an opportunity to promote education for PGA professionals for business skills. Golf professionals are known for being good teachers or good players, but as far as knowing and having an expanded knowledge about the business side of golf, I think that’s very important.”

There is one business aspect that West has become familiar with over the years.

“The turf side of golf has become pretty close to my heart,” West said. “All of the superintendents are under me at Tellico Village and I’m very, very close to them, so the turf side of things I’m also very close to. I’m kind of a rare breed for a golf professional being close to the turf grass part of it, so I’ve really tried to promote turf grass education for other golf professionals.

“… I’ve even had some golf professors from the University of Tennessee come speak to us,” West added. “They’re an amazing resource for golf courses, and I can’t say enough good about them. Everything that I’ve put together, in terms of education, has been open for both golf professionals and golf superintendents.”

West believes the Bill Strausbaugh Award mirrors the way he has worked with golf professionals throughout the Village.

“All three of those guys have really taken off in their careers, and it’s exciting to see that come to fruition,” West said. “You know with Casey and Charles, those guys are both superstars. Jeff also does a great job with instruction and is a valuable asset for this community.”

Jacob received the Richard Eller Growth of the Game Award for his instructional programs to recruit and train Village residents in the sport.

“As golf professionals, we’re always looking for ways to grow the game,” Jacob said. “A year ago, we started some new programs that really took off and this year I was fortunate enough to be recognized for that. Women’s golf has also really grown in Tellico Village, so we started some basic beginner classes for women and men that covered different topics each week. You know, we’d do one week of putting, then the next week would be drivers and the following week would be irons. Those were highly popular.”

West praised the effort Jacobs has put into programs in Tellico Village.

“Adam has worked really hard with new golf programs for people that are new to the Village,” West said. “These are people who are thinking they might want to take up golf or might not want to, but it’s been his forte. He holds these boot camps to help people with specific areas of their game, and they’ve been incredibly popular. They start in the spring and run all the way into the fall and we literally didn’t have enough golf professionals to conduct the clinics because the demand was so high.”

Jacob has also volunteered his time to coach the Greenback Middle School golf team over the last several years.

“I got started with them probably about six or seven years ago as a volunteer,” Jacob said. “A couple of years ago, I came on full time and I was able to just get out there and get the kids golfing. A lot of them were new to golf, so we were able to hook them up with clubs and everything. I help them with their stance, posture and other fundamentals. I really enjoy working with them, and it’s a lot of fun seeing the joy on their face when they make their first par. It’s been a really cool experience.”

Reaching out to the Greenback community has really shown Jacob’s love for spreading the game of golf, West said.

“I know that there are several kids in the Greenback community that are at a disadvantage and would have never had the opportunity to play golf if it weren’t for Adam,” West said. “He actually coached a young girl there that went on to compete at the state level, which was a first in that program’s history. He also had a young man who he started coaching in middle school, continued working with him through the years and is now going on to play college golf, which is incredibly cool.”

West and Jacob will both have the chance to win their respective awards at the state level this year.