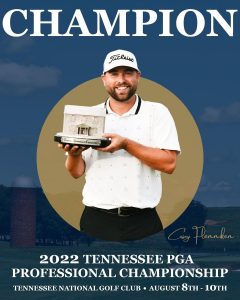 Loudon, TN – Tanasi Golf Course’s Head Golf Professional took home the most prestigious trophy in the Tennessee PGA’s season on Wednesday. Flenniken finished with a par on the final hole to close out an incredible final round 65 at Tennessee National Golf Club. The clutch final round followed an opening day 70 and a moving day 67 to finish 14 under par for the tournament which included 18 birdies and 2 eagles.

Flenniken needed every one of those birdies in an exciting one-stroke victory over Troubadour Golf and Field Club’s Johan Kok. Kok, who won this event four consecutive years from 2017 – 2020, didn’t leave the Tellico Village golf professional any room to breathe, firing a final round 66. However, the Middle Tennessee resident from South Africa faltered with a bogey on the 17th hole of the final round. “Flenny” seized the opportunity in route to his first Section Championship.

This win also qualifies the champion to play in the 2023 PGA Professional Championship to be held in April 2023 in New Mexico. The top 20 finishers in that event will qualify to compete with the world’s greatest players for the 2023 PGA Championship at Oak Hill Country Club.

For more information regarding this tournament, Tennessee PGA tournaments, Player of the Year, and more visit TennPGA.com.