What are the Chances? Back-to-Back Hole-in-Ones Defy the Odds at Toqua 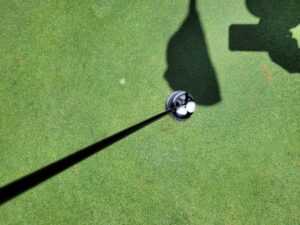 What are the Chances? Back-to-Back Hole-in-Ones Defy the Odds at Toqua

Loudon, TN – Friday, May 27th’s round of golf will go down as an all-time memory for one Tellico Village resident and guest as they recorded back-to-back hole-in-ones. The ultra-rare feat was accomplished on Toqua Golf Club’s fifth hole, measuring around 135 yards on the day. Guest Greg Simons, a member at Oak Ridge Country Club, was the third of his foursome to tee off on the par 3. “Greg then hit his tee shot and with the flag covered all of the way, we saw it bounce and go into the hole” Tellico Village resident Phil Hoy described.

After the subsequent celebrations subsided, Hoy realized he still had to hit his tee shot as well. Not to be outdone, “I teed off and again with the flag covered all of the way it took a couple of bounces and into the hole it went. Damnest (sic) thing I have ever seen” he described.