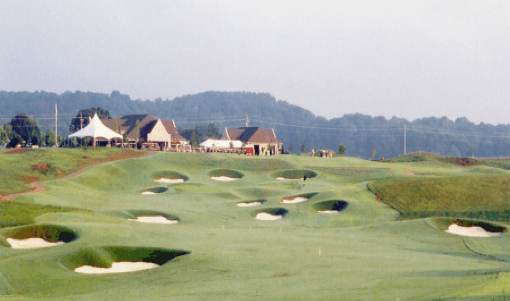 For golf operations at Tellico Village, 2018 was a roller-coaster year of extremes. We started off the year with an exceptionally cold winter with lots of frozen ground that lasted well into the spring. Spring is typically a season that begins mid-March and continues until early June. However, this year we largely skipped spring and went from a very cold winter straight into a hot and wet summer. Hot and humid summers aren’t something uncommon in East Tennessee; however, the amount of rain we received in 2018 set all-time records. We recorded a whopping 78.4″ of precipitation in 2018. In comparison, Seattle Washington only recorded 35.7″!
Obviously, record rainfall had a considerably negative effect on golf rounds and revenue as both fell woefully short of projections in 2018. However, even with rain dampening our financial performance there were many memorable positive events and activities in 2018.
Toqua Head Golf Professional Adam Jacob came up with an innovative way to help introduce beginning ladies to the game of golf and hook them on the experience. He patterned his idea off the hugely successful PGA Junior League by creating a similar concept with the ladies with an unintimidating and friendly 2-person team competition. In a year plagued with record precipitation that otherwise resulted in double-digit declines in rounds at courses across our region, Adam was able to grow participation in our developmental Lady Linksters league by a remarkable 20%. Adam was recognized for his efforts by the Knoxville Chapter PGA when the organization awarded him the 2018 Richard Eller Growth of the Game Award!
Our Toqua Golf Course underwent a wonderful major improvement project with all-new golf car paths. Head Golf Course Superintendent Chris Sykes and his turfcare team worked with our Public Works department to maximize the impact of this project. Paths were re-routed and re-contoured on several holes to more appropriate locations. These beautiful new paths will last for many years! Toqua also hosted a major amateur championship in 2018 with the Tennessee State Golf Association Four-Ball Championship in late June, which received rave reviews from the finest players in Tennessee.
At our Tanasi Golf Course, our turfcare team led by Head Superintendent Wells McClure completed the final stage of a three-year bunker renovation project. Wells and his team successfully renovated all greenside bunkers using Capillary Concrete for liners and SP-55 sand. As part of this process, they also took the opportunity to re-contour numerous bunker cavities to reduce the amount of slope and improve the playability of the bunkers. By completing this project with in-house labor, Wells and his team saving the POA tens of thousands of dollars. On the proshop side at Tanasi, PGA Professional Casey Flenniken earned his fourth consecutive Tennessee Section PGA Assistant Player of the Year Award!
At The Links at Kahite, Head Superintendent Jordan Clark worked diligently to improve playability of the course. Jordan widened fairway corridors on many holes and converted several areas of cool rough (Fescue) to primary rough (Bermuda). All the precipitation made it difficult, but Jordan and his team worked tirelessly to control the height of the primary rough. Another wonderful 2018 highlight came when the Tennessee Turfgrass Association awarded the Link at Kahite and Jordan Clark with the 2018 Environmental Stewardship Award!
Another big moment was when the POA Board assembled a Golf Ad Hoc Committee to assist in developing plans to help control golf subsidies going forward. This committee was headed by POA Board Member Mike Colacone and consisted of an intentionally diverse group of golfers and non-golfers. Over a period of several months this committee developed recommendations to present to the Golf Advisory Committee and POA Board of Directors that served as the basis for the 2019 fee structure. Included in this recommendation were new afternoon unlimited golf options to provide affordable golf during the afternoons, while maximizing revenue for the POA.
Posted on: February 12, 2019, by : caddyshack