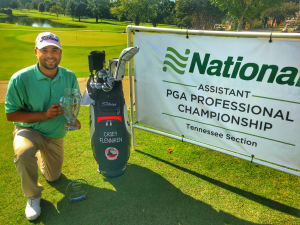 Flenniken’s game was just as hot as the weather during the first round. Casey fired an impressive score of 63 (-8) on Monday. His round included eight birdies and ten pars. He was followed by Kevin Snell of Henry Horton, who shot a 67 (-4). Rounding out the top three was Bobby O’Brien, PGA of Chickasaw Country Club with a 68 (-3).

All in all, this Championship turned out to be an extremely competitive one. The Tennessee PGA would like to thank Johnny Bridgeman, PGA, Andrew Kincaid, PGA, Scott Primm, PGA and the rest of the staff at Brentwood Country Club for making this tournament possible.

And a special thank you to National Car Rental, Cleveland/Srixon/XXIO, Golf Advisor, and John Deere for sponsoring this year’s Tennessee Assistant PGA Professional Championship. Without the support of our sponsors, the Tennessee PGA’s events would not be made possible.