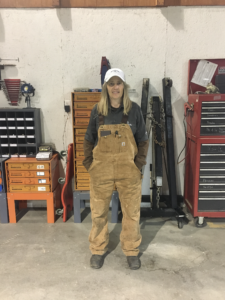 Kim Duffey was born and raised in Chattanooga, Tennessee. She comes from a large family, with her being the youngest of five brothers and sisters. Until the death of her father when she was 13, she spent most of her time observing him working on the farm and picking up unique skills, which is how she was able to learn the craftmanship of equipment maintenance. After her father’s death, Kim and her mother were left to manage a farm of pigs, cows, horses, and a garden for food. The “figure it out” mentality started early for Kim, and she became very successful with that mindset. Through school, Kim mostly worked behind the counter at an automotive retail and parts store. She eventually worked her way up to management after she graduated high school. Kim’s childhood experiences most certainly explains her organizational skills around the shop at Kahite.

In 2001, Kim decided to dive into the golf business. Kim says, “I always enjoyed working on things and being outdoors. Golf courses are ever changing, every day.”

She began her career at the most prestigious golf facility in the state of Tennessee, The Honors Course in Ooltewah. She started out as an assistant mechanic under the long-time tenured mechanic, Paul Worley (30+ years of experience). Paul’s health declined over the years, which led to Kim taking over the majority of the responsibilities of that operation in 2004.

“Being a golf course mechanic is much more than just changing oil in the machine,” says Kim. She became familiar with doing all that was required of her with turf equipment and fabrication very quickly, building a resume that competes with anyone throughout the country in her field. Later, the legendary golf course superintendent, David Stone, announced retirement which led Kim to dive into another operation. She joined our Kahite team in 2016 and has kept our golf course running ever since. Kim still lives in Chattanooga but stays in Athens to better commute to work during the week. This cuts her commute in half, though still leaving 45 minutes to get to work.

Over the years, she has provided us with unique skillsets outside of turf equipment that make her valuable to our team. Each winter, Kahite updates the maintenance facility to enhance operations and organization during the busiest golfing season. She instructed and assisted in the construction of our nice breakroom, our small tools room, an inside fertilizer storage area, an outside extension of our equipment shed, and has made her own personal improvements in her work area to make her job easier. We are all of the mindset that “it starts at the shop and what we do at the shop makes our job easier on the golf course.” She learned these skills at an early age along with custom body work, painting, drywall, construction, housing additions, and of course, lawn mower maintenance. Kim was also the first to utilize the Amazon account in the Village for most equipment repairs and fabrications.  This is a much cheaper option for us and allows her to do more with her yearly budget. She is very skilled. She is also known for her love of animals, especially dogs. She brings her dog Stella to work occasionally. Her hobbies are fishing and playing pool to get away from the golf course world when she can.

Thoughts from the Superintendent: Kim is the most important person on our team. She carries the skills to keep Kahite running. Without her knowledge and expertise, we would not be able to perform our jobs and Kahite would most definitely not have come as far as it has since 2016. Kim is an incredible person and her loyalty runs deep. We are so thankful Kim has found her way to Tellico Village, as she fits in well with the family-minded operation at The Links at Kahite. Thank you for your service, Kim! 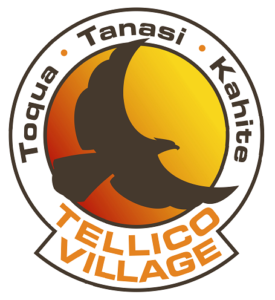